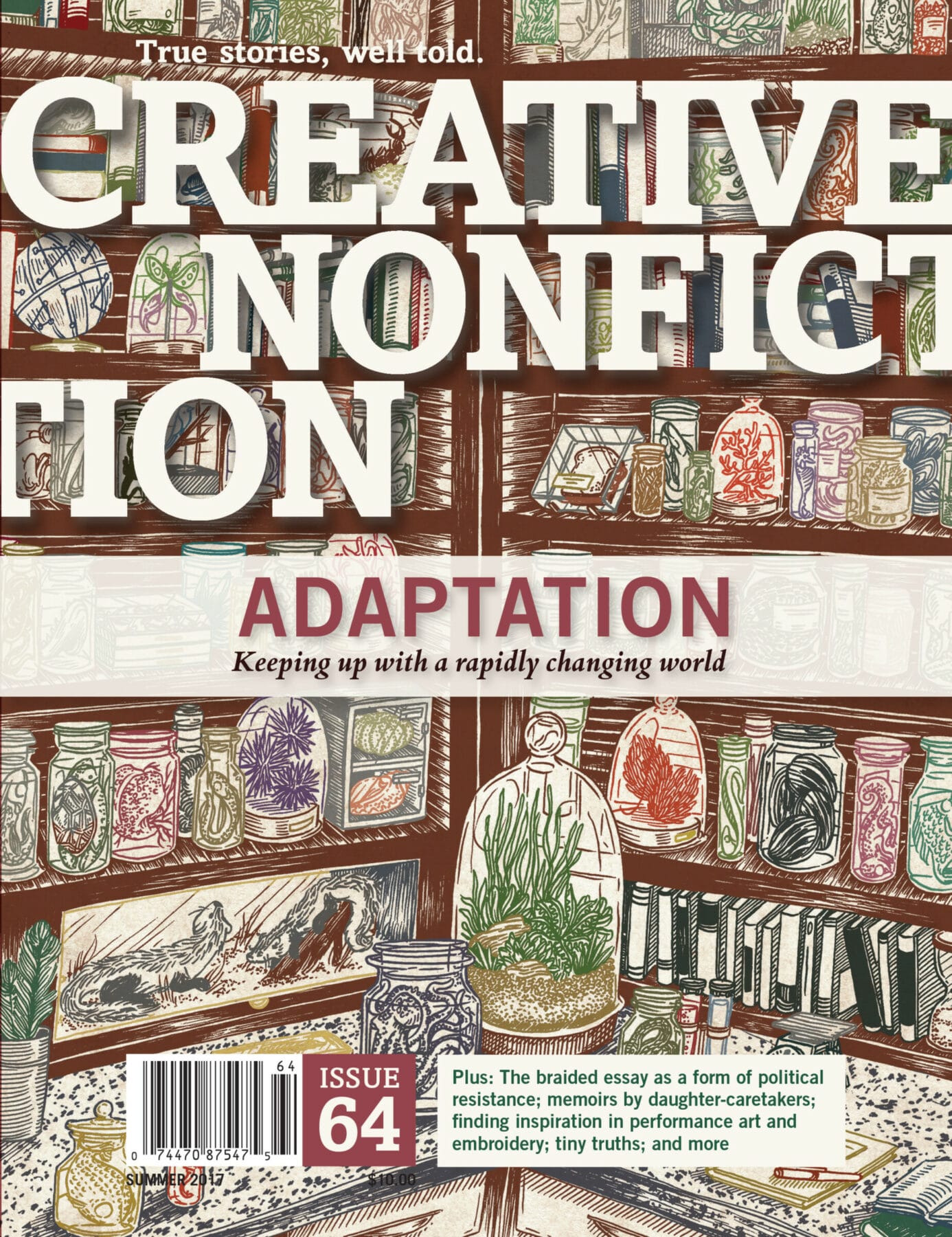 This issue is about how to keep up—personally, politically, scientifically—with our rapidly changing world. In these essays, writers find new normals, ways to adjust or adapt and move forward in the face of adversity.

But the flip side of adaptation—resisting changes that could be problematic and hurtful—is just as important. In particular, what I want to talk about today is how crucial it is for us, as creative nonfiction writers (and readers), to resist adapting to what seems to be a rapidly eroding belief in the existence of truth, and facts, not to mention a widespread failure to distinguish between what is real and what is not.

Of course, an individual’s perception of reality is always somewhat less than objective, and the different ways in which we perceive the same events are part of what makes life—and literature—so interesting. Indeed, this tension is at the heart of creative nonfiction itself.

But the current focus on “alternative facts” and “fake news” goes far beyond innocent differences in perception. Alternative facts, of course, was coined by presidential counselor and campaign strategist Kellyanne Conway on the Sunday morning news show Meet the Press, discussing White House press secretary Sean Spicer’s claims about the size of the crowd during President Trump’s inauguration.

Conway defended and justified her term, explaining that there’s more than one way to define fact. “Two plus two is four. Three plus one is four,” she said, presumably laying a baseline. She continued, “Partly cloudy, partly sunny. Glass half-full, glass half-empty. Those are alternative facts.”

It made me think back a dozen years to all the criticism of and hoopla over James Frey.

Frey, as you may recall, is the author of the memoir A Million Little Pieces, which was Number 1 on the New York Times best-seller list for fifteen straight weeks in 2005 after becoming an Oprah’s Book Club selection. Oprah was seduced by the dramatic story of Frey, a twenty-three-year-old criminal and addict who was tortured in jail and forced to undergo a series of root canals—without painkillers—and eventually, courageously, rehabilitated himself. He was introduced on her show as “the man who kept Oprah up [reading] all night.” Less than a year later, The Smoking Gun website outed Frey, documenting how he had fabricated many of the details and events in his book. For example, he had not been imprisoned for three months, but only held at a police station for five hours. The tortuous root canals never happened.

Following The Smoking Gun, there was a media frenzy, as well as an outcry in the publishing world. Journalists and commentators weighed in, including Maureen Dowd at the New York Times and Richard Cohen at the Washington Post, and even Steven Levitt, author of Freakonomics, attacking Frey for writing fiction in the guise of nonfiction and Oprah herself for accepting and promoting Frey’s “Million Little Lies” as undocumented gospel. Frey eventually owned up to some of his fabrications, first on Larry King Live and, then, on Oprah in early 2006. Oprah herself, angry and embarrassed, opened that show by declaring: “I made a mistake, and I left the impression that the truth does not matter. And I am deeply sorry about that, because that is not what I believe.”

And yet, despite the outcry and consequences to Frey, other literary scandals followed. There was Margaret Seltzer, a.k.a. Margaret B. Jones (Love and Consequences: A Memoir of Hope and Survival), who captured her life growing up in Los Angeles as a half white, half Native American foster child, a gang member and drug dealer—all of which was later revealed by her biological sister to be entirely untrue. Or Jonah Lehrer, a New Yorker staff writer and former Rhodes Scholar who fabricated quotations from Bob Dylan in his 2012 book, How Creativity Works. And then there’s Rachel Dolezal, the NAACP chapter president who described her decision to identify as black (though, as her parents revealed, she’s not) as “a creative nonfiction.”

I worry, sometimes, whether these scandals have helped pave the path for “alternative facts.” Despite relatively widespread agreement that creative nonfiction writers shouldn’t make stuff up, it’s possible that for at least some readers and writers, art trumps accuracy, and the line between “personal and subjective” and “lies” is just not that important. (If you couldn’t tell, I am not in this camp.)

And yet, “alternative facts” go way beyond that notion. They are something else entirely—a way to deceive the American public and make us believe that any kind of information can be twisted and turned to fit any corrupted interpretation. It is not OK for writers to do this, but it is even more dangerous for the leader of our country and his representatives to deliberately mislead or lie to journalists or citizens.

Now that “alternative facts” and “fake news” have become part of our national conversation, I am hoping that all nonfiction writers and their publishers will recognize that the accuracy of what we write and publish is even more important than ever before. Faced with an executive branch that calls into question the very existence of facts, it is not only our responsibility to achieve an unimpeachable standard of accuracy and honesty in our work—it should be our mission.

It’s more important than ever for writers to remain clear-eyed and to grapple with the big questions. This issue is generously supported by Arizona State University’s School for the Future of Innovation, and our focus on adaptation reflects SFIS’s dedication to helping create a future we will want to inhabit. Thanks to this support, we were able to offer a $3,500 prize for the best essay submitted in an international competition; our editors chose Lawrence Lenhart’s “If the Ferret Crosses the Road” from almost two hundred submissions. Part of a series of essays the author is writing about the black-footed ferret, the prize-winning essay explores the issues related to the reintroduction of one of North America’s most endangered mammal species to its natural habitat; it’s also a love song to driving in the wide-open spaces of the American West and a meditation on what conservation really means.

In other essays, writers explore the adaptation theme along the eroding shores of Georgia’s barrier islands, in the national parks of Alaska, and at a series of climate change conferences. Personal experiences—pregnancy, the loss of a child, a father who has lost his equilibrium—also offer opportunities to consider the process of adaptation.

As Joan Didion wrote shortly after the sudden death of her husband, “Life changes fast. Life changes in the instant.” It seems, lately, that we are living in a time of more rapid than usual change, but perhaps that’s not the case. Perhaps it’s the scale of the changes we are facing that is new, or maybe it’s just that the speed at which information travels has made us more aware of change as it happens.

Whatever the case, creative nonfiction may well be the form for our times. Not because it is alternative facts—it is not—but because it is a way to evaluate and express facts with clarity, artfulness, and honesty.