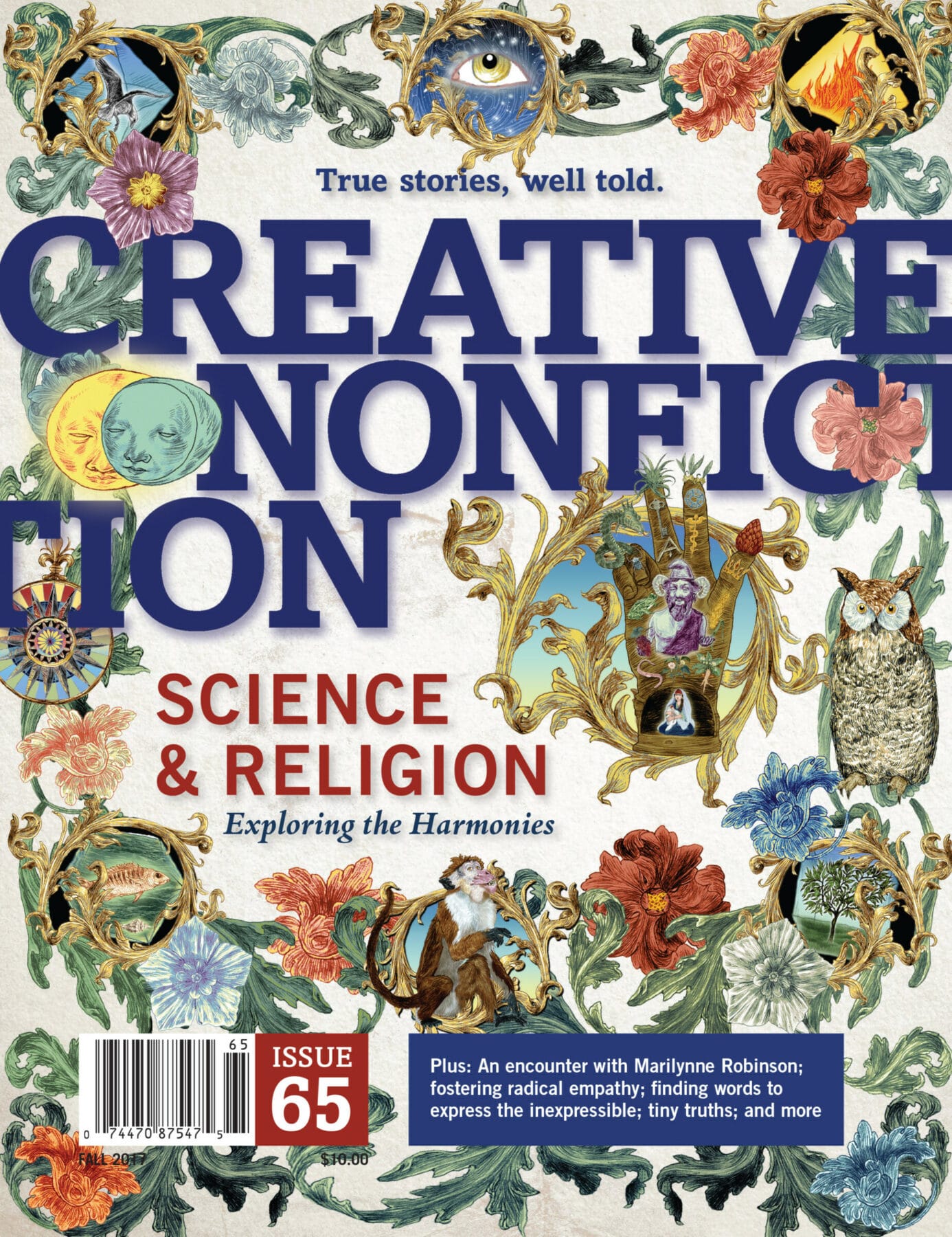 The power of ritual is what drew me back, more than anything, to practicing a traditional faith. I’d tried other ways of being spiritual and religious, but it wasn’t until I stepped back into a Catholic church where schoolchildren were walking the Way of the Cross that I felt I had entered a space where I could worship. Hearing all their young voices enunciating Scripture in unison, I felt something that I had long forgotten in my years outside of the Church, a feeling that was something like home and a little tribal. But it wasn’t only nostalgia.

Since then, I’ve written about the Way of the Cross many times—in many different essays—trying to understand my attraction to it and the strange comfort it gives me. What was it about that particular ritual that overpowered me? Why didn’t I find it morbid to see small children walking in the footsteps of a tortured man, imagining and inhabiting a death scene?

I participated in this ritual nearly every Friday during Lent as a child, and when I took it back up as an adult, I felt an overwhelming connectedness with the living and the dead, with all those who had walked this way before me and all those who will walk it long after I’m gone, and even with my former self, my childhood self. I wondered if the ritual had somehow taken root in my imagination, teaching me to see—through secular symbols and metaphors and poetry—a deeper meaning in suffering. It wasn’t merely the story of the crucifixion that conveyed the meaning to me; it was the rhythm of the words of the prayers, the heads dipping in unison, the rhythmic bending of knees, the tune of the hymn “Stabat Mater.” When you’re a kid, you easily tune out the story. But the rhythm, the images, the smells, stay with you, like faint traces of perfume in the folds of my clothes.

Those rhythms and images and smells return the story to me in unexpected ways—not just the story of the death of Jesus, but my story. Any time I practice this ritual, I’m entering both. It gives me access to memories of my former self that might otherwise remain buried.
Joan Didion, sometimes described as a literary patron saint, describes the power of ritual in “On Keeping a Notebook:”

some morning when the world seems drained of wonder, some day when I am only going through the motions of doing what I am supposed to do . . . on that bankrupt morning I will simply open my notebook and there it will all be . . .

Didion’s ritual—the daily writing—is writerly rather than religious, but the end result seems to me to be similar. Yes, sometimes rituals feel empty, rote, or monotonous. But they can also be containers for deeper knowledge and sensory memory, and perhaps also for previous selves now otherwise lost. Meaning is found at the intersection of the ritual and the individual, in the space where our experience and creativity meets an established or “rote” form.

Conversely, experiencing a ritual for the first time may reveal something about ourselves we never realized before. As Didion helpfully puts it:

However dutifully we record what we see around us, the common denominator of all we see is always, transparently, shamelessly, the implacable “I.”

But the first step is to dutifully record. Ask yourself the following questions when writing about ritual:

What is in front of you?
Behind you?
Look all around you and notice the specifics of the space you’re in.
Why are you there?
Who else is there?
Who is leaving?
Who is paying attention and who is not?
Who is crying?
Is this a familiar or unfamiliar place or event?
Do you feel welcome or unwelcome?
Do you feel like you belong?

When writing about a ritual from a tradition that is foreign to you, try not to make assumptions about the people who are practicing it. “Spiritual tourism” holds perils—assuming more knowledge of a culture than you really have, sentimentalizing the faith of others, or appropriating a ritual or practice that isn’t your own as if it were. I admit I’m a frequent spiritual tourist—I love going on pilgrimages and visiting the holy sites of many different faiths, and I love reading about others’ experiences as well. But I find the writing most compelling when the discomfort or revulsion or attraction or tension or even ignorance the writer feels tells me about who they are, what they believe, and what they’ve learned about themselves in this context, rather than assuming knowledge or judgment of those they encountered.

In his essay, “A Skull in Varanasi, A Head in Baghdad,” writer Todd Gitlin—who says he is not at all a religious person—wakes up to who he is and what he stands for while contemplating an unfamiliar religious ritual that involves the smashing of skulls in the Ganges River in India. When he returns home to New York to the news of the decapitation of a young American in Baghdad, his brain makes a connection between the two experiences and what they say about what it means to be human, to have a body with a skull and a brain that will meet an end.

“No doubt there is a great deal about these beliefs I don’t begin to get,” he writes of the Hindu ritual. “But these are the mind’s pastimes of an amateur, a curious dilettante.” Ritual, by definition, is always the same. But the experience of ritual, the internal story experienced, the knowledge gained, can vary vastly.

Writers can also use well-known rituals as a starting point to push against or render in unexpected ways. The very short essay “Ash Wednesday, 2000” from Susan Neville’s memoir, Iconography, grew out of a writerly experiment, a vow to write every day for the season of Lent. Neville, who is not Catholic, had never observed Lent, but she had a hunch that ritualizing her writing in this way might reveal a pattern or narrative in her life that she was otherwise unable to grasp. She’d never been to an Ash Wednesday Mass, and despite her commitment to exploring Lent, she doesn’t end up there this time either. Instead, she goes to the mall. This, she admits, is a ritual that grounds and comforts her, that speaks to her of who she is (though would rather not be)—a middle-aged, white American who finds a ritualistic comfort in shopping. And yet, by the end of the essay, she finds herself covered in ashes, at least metaphorically. She goes to the makeup counter and covers her hands in different shades of lipstick. When she writes about the experience in her Lenten journal, she arrives at the same destination as the Catholics—reminded of her own mortality—though in her own peculiar way.

In the essay “All of the Above,” writer Faith Adiele takes on the ritual of telling a story at a dinner party—even breaking it into helpful steps for the reader with a numbered list—while also considering the rituals of courtship and marriage in three different cultures: Nordic, American, and Nigerian. Again, we see that rituals serve to show us both who we are and who we aren’t—a consistent theme in the work of Adiele, who navigates all three heritages and ethnicities in her own life. She is a storyteller, but her story doesn’t quite fit into the container of standard tales of American courtship. She plays with that container, to comedic effect, in this piece. She begins:

In your new married life, You & O are invited to couples’ dinner parties where at some point the hostess turns to you and crows: “Tell the story of your marriage!” At fifty-something, this is your first marriage, so you wonder, is this what married people do? Or are you objects of speculation because you’re fifty-something first-time newlyweds? Or has someone told her that either the story or its telling is dinner-party-worthy? Still somewhat enamored of your own story, you’re happy to oblige, after the inevitable glance at each other (who’s got this?), the inevitable writerly pondering of what to include, where to begin.

Faced with telling their unconventional tale of cross-cultural, middle-aged romance, she relies on a standard form—a ritual—to give shape to what might otherwise seem shapeless.

Step one, according to Adiele: “Begin at a pivotal moment.”

From there, she makes the form her plaything; she is as digressive and poetic as she cares to be. That playfulness acknowledges her facility for crafting a crowd-pleasing narrative out of the most personal experience—a nod to the essayist’s gift and burden.

Research in neuroscience supports the conclusion that rituals—not just religious rituals, but also the secular kind, including list-making, daily journaling, and other writerly tools—really do work. At the very least, they work to ground us and to comfort us. Mourning rituals can lessen feelings of grief, for example. And I’d suggest that the weird rituals you need to perform before you write—most of us have them—may truly help you to focus your attention and prepare your brain for the experience. Some people feel guilty about procrastination, but I encourage my writing students to see it as part of the process. Build your particular mode of procrastination into your writing ritual, and you may begin to see it not as an evasion but as a necessary part of your practice—which it is.

For an artist and a writer, being uncomfortable with a ritual can be equally fruitful, a source of creative tension. Not everyone will agree with me that contemplating the death of Jesus is a comfort. People who suffer from post-traumatic stress disorder may be retraumatized by Lenten rituals and traditional Christian devotions. But just think how different an essay would look from each perspective, and how the same ritual might serve as a frame for the exploration of two vastly different experiences.