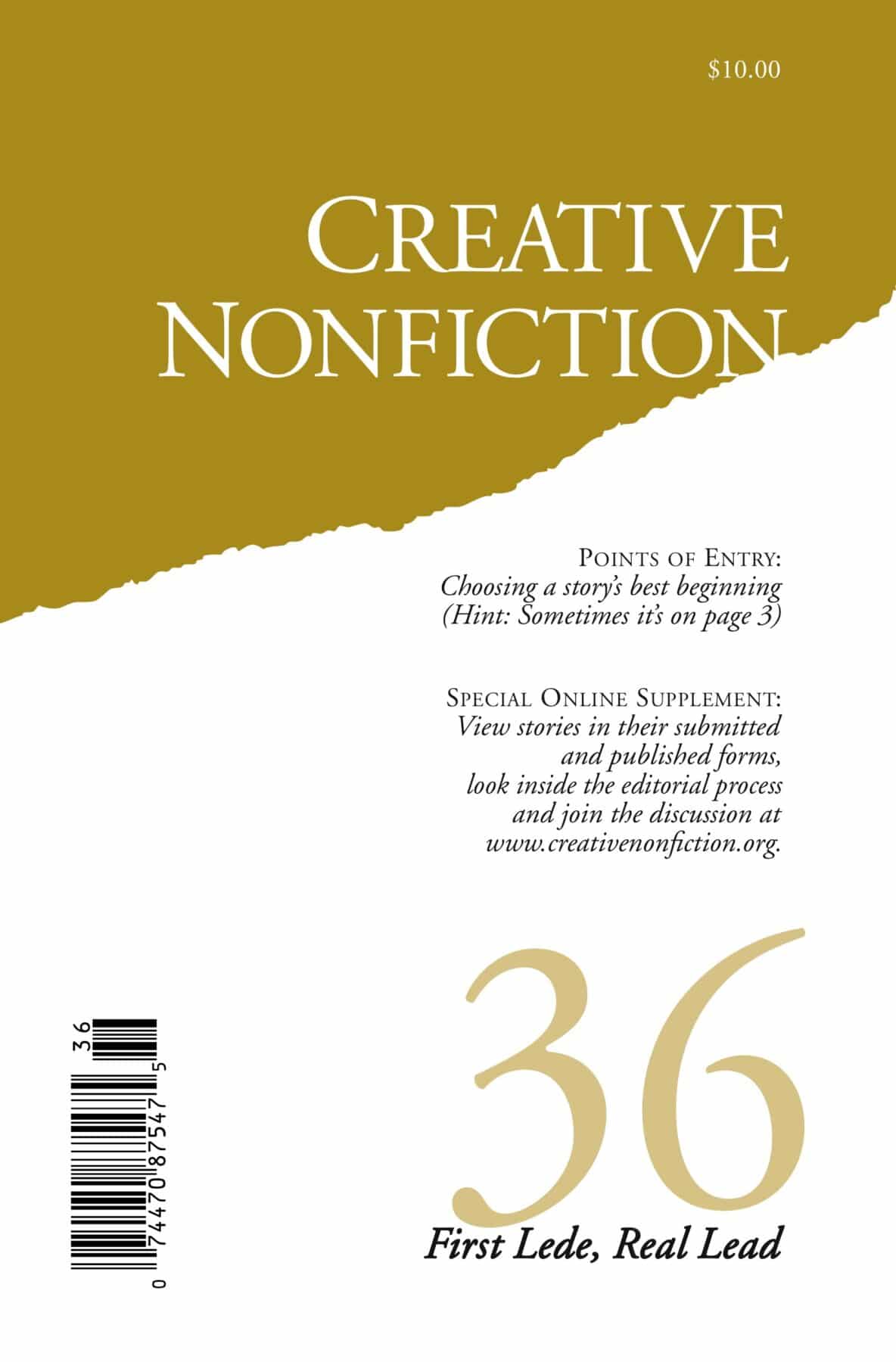 First, three beginnings. Who is to say which is the source of all that followed?

“He was always restless,” says his wife. Etc.

So one of those three was the beginning, or all of them: a chunk of British Columbia gold, a yellowing map and a greasy hand tracing the same river over and over.

He started panning for gold.

What did the locals think?

What do locals think of anyone who makes the journey to their part of the blessed earth? Fools. He found gold—just a little bit, but it glittered.

The locals say it was fool’s gold, iron pyrite. They say he salted the river with gold from California.

“They’ve got some very funny ideas,” he says.

He moved his family up there.

What did his wife think? “He came home one day and said the house was for sale.”

“It broke my wife’s ass selling the house—the house I built. She still cusses coming up here. But it’s something I had in my system. I’ve always believed that if a man wants to do something, God damn, go do it.”

He adds, “I didn’t take into account it was kind of an imposition on her.”

The river was the Wild Ammonoosuc. In the winter it’s mean country. Small houses with walls thinner than saltines. Everyone holes up, and you can see blue smoke from the tin-pipe chimneys. You can’t imagine that anyone’s warm, really warm. In summer—late-arriving summer—it’s a green and gracious country. People come up to fish. The same folks return, year after year, to the same cabins.

He never got rich, but he got fame of a local kind. The Old Prospector, that’s what folks called him. He showed others how to pan for gold. Sold pans. Wrote a booklet. Gave lectures down at the state capital to standing-room-only audiences. He told them: “You just don’t pick up a pie tin. It’s like dancing. First you have to get that rhythm.”

“A nice way to spend the day, have a picnic, maybe find something,” he said. Gold—who can resist?

Did he have gold fever?

Yes, he says, there is such a thing.

Did he have it?

No. Sure, he’d go out on the river every morning. …

He’d go out to pan, others would follow him. He’d have to sneak out real early. Park his car one place, walk a half mile or more, go pan in another.

Not good enough. Some people wanted to find more gold. They started dredging the river—walking up and down, vacuuming up the bottom and spitting it out through a screen and back into the water. The machines make an awful noise, frighten the fish. They leak gasoline. Waves erode the riverbank. The Old Prospector wanted it stopped. This was no way to treat the Wild Ammonoosuc. “It’s become a thing of greed,” he says. In some places the dredgers had changed the course of the river. “I’d go down there, and I wouldn’t recognize the river.” Some of the dredgers would work past dark, their cars’ headlights lighting the river. Why work so hard? “Just the lure of gold—get more gold, more gold,” he explains.

They said he just wanted all the gold.

He wanted it all?

But what did he have?

In his 77th year, deep in winter, this is where he lives, what he has. A 7-by-7-foot shack (if that big), wallpapered—no, insulated— with newspaper. A woodstove made from an oil drum. A chair, a bed, colorful pill bottles. A radio (powered by batteries probably, electricity not likely). Nearby, another shack where he used to sell his prospecting supplies and show the gold flakes he had found. (Grains really, the size of mustard seeds. A lifetime’s harvest, a few ounces.) Next door, an old mobile home for a relative.

As he talks, his hands shake.

He gets up mid-sentence, grabs a Martinson coffee can and starts toward the back door. The door opens. I see some rusty metal shapes sugared by snow. It’s a bleak winter, little snow. Hard earth with a white crust. I’m not sure if he wants me to follow.

He keeps talking. I hesitate, and then I hear him peeing into the can.

Twenty years of gold prospecting and not a pot to piss in. Some cliches are true.

“We’re the poorest people around. We live on Social Security, and that’s all,” he tells me. He’s a thin, shrunken man, except, it seems, for his fingers, which are as long and thick as the cigars he smokes. He has thick, uncut fingernails.

He can’t go down to the river anymore, the river that flows less than 20 feet from his back door. “All of a sudden I got a fear of the river. I wouldn’t go down there—not for all the money in the world. I get near the river, and I get nervous inside me.” The doctors gave him pills.

His father had found that lump of gold, and another, on the Fraser River in British Columbia. “I tried to find out from him where he found it exactly, but the Fraser River is as long as the Hudson.” He persisted and had a mineralogist identify the gold and tell him where it was from. It had washed down the river. It was just dumb luck to find something like that lying on the riverbed, just chance.

He and his father made plans to go out to British Columbia, way out west, and prospect for more gold. They talked about it often.

They didn’t go. The Old Prospector got married. (“Like a jerk, I got married,” is what he says.) His father remarried.

He ends the story: “So I’ve always had gold going around up here.” He taps the side of his head.

“Good thing we didn’t go. We’d probably still be out there.”

But why? What sent him far north?

“One other thing,” he says.

Years later he was looking at the map—the map that said there was gold here. And he found it was wrong. The mining journal correspondent had made an error. He had witnessed gold panning on the Gale River, some 20 miles north of here. He had mislabeled the river.

A mapmaker’s error, a life changed. But he did find gold.

He found gold in his first half-hour of panning. Just dumb luck, he says. On the 18 miles of the Wild Ammonoosuc there are small deposits of gold only along a three-mile stretch, and within that stretch most gold is found along a half-mile run of the river. Small amounts, gold measured in grains the size of mustard seeds. The largest he ever found was 51 grains, 51 mustard seeds. It weighed a bit more than a penny. But pure, 99 percent pure.

What ever happened to that piece of Fraser River gold? He still has it, “somewheres,” he says.

Panning for gold, sifting the waters for something of value. History is like that. Time is a river, said the Greek philosopher; different and ever different waters flow down. We sift; we choose. We are all the time choosing our ancestors, all the time looking for fathers, distant and near, who came bearing gifts of gold.